For me, working with boards started in 1983 when I was working at Murray Smith Surfboards in Perth. I started with ding repairs and a bit of sanding, graduating to shaping and spent the best parts of 83-86 making boards. In 1985 my professional surfing career took off and I started on the ASP World Championship Tour.

For the first two seasons I was shaping and riding my own boards, but as I got more serious with contests I had less time because I was away so much and I started riding Col Ladhams boards.

It was all about refinement for my boards during that decade on tour. When you’re competing you’re not being very experimental; when you get a good board you put it in cotton wool and you hang on to it. My shaping roots have always been in the custom surfboard and I was always heavily involved with design.

When I finished up with the tour at the end of 94, I was up in Perth repping for Quiksilver. Brad Leonhardt, who now works at Yahoo, was working at The Power Station at the time and he said to me, “Why don’t you start shaping again?” I was a bit dubious but Brad pushed it, he was really behind the whole idea of me getting back in to it.

I didn’t really want to live in Perth anyway and I would have had to stay there if I had kept on with Quiksilver, but when Oggy was kind enough to help me out I started working at Yahoo. Oggy helped me relearn everything that might have left my mind during that 10 year hiatus.

We worked up in Japan a lot, I was a team rider and Oggy was a shaper for ACT Surfboards. Once I was confident enough I went up there as a shaper too. Oggy and I did lots of trips to Japan together, working and living the Japanese culture. It was a pretty cool time. I ended up spending less time in Japan as we started making the boards back in Dunsborough and sending them up. Eventually I just came back to shaping at home.

When the twins were 11 years old I made them their first surfboards. On Laura’s board Chubby did this awesome spray of dolphins on the bottom. I always told my kids that I wish I had kept my first ever surfboard so I sort of made them hang on to theirs. It’s pretty cool they’ve still got them. Bronte started really getting into surfing when she was nine years old, and it’s been really exciting to see her graduate on to the WSL Championship Tour this year. I normally make all her boards but because I’m going to be travelling with her all year, 18 events in total, we got DH (Darren Handley) on board. It’s been unreal and he’s making a bunch of boards for her, as well as mine that she’s already riding.

With Taj retired from the CT he left a pretty big hole for WA surfers, and it’s just Bronte on Tour to represent WA. The local support has been fantastic and I regularly hear from guys about how exciting it is to watch the women’s tour. I’m stoked to be a part of it.

Western Australia is so different to the East coast; the waves here just have more push, power and volume. I think that’s one of the reasons we find a lot of our boards are customised. For example, a lot of guys will get 6 ounce glass jobs because there’s a higher chance of snapping your board here. We really work hard to get the right balance between performance and longevity of your board.

I get in the water more days than not and I’m loving riding my Bruce model. I love getting feedback from customers and I get a lot of that in the water. In between sets I talk to the guy next to me – maybe he’s a similar size and I can give him my board to try on the next wave. It works for all the shapers at Yahoo. You’ll see a good percentage of my boards around Gracetown and a fair few of Oggy’s boards around Yallingup.

Keeping local crew happy and specialising in custom boards is what drives me. Refining my models and getting as much chance to test them as possible… 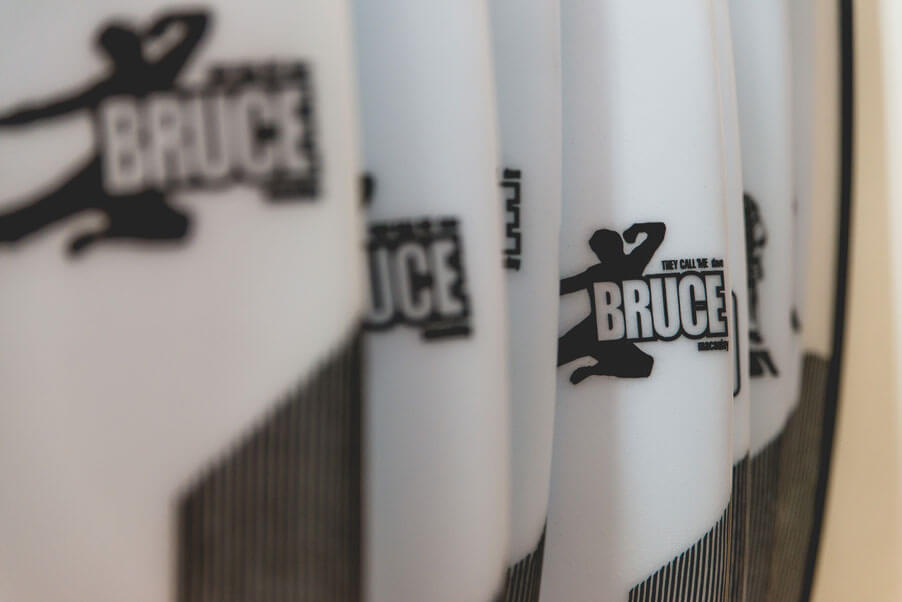